Europe Day 2021: let’s shape the future of Europe together! 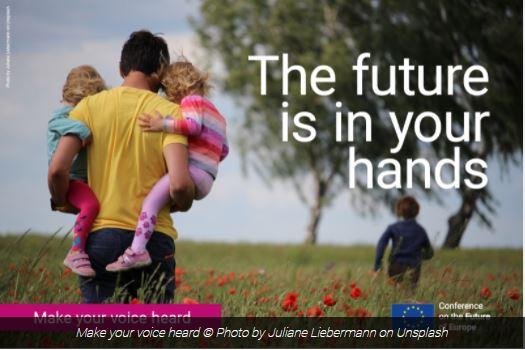 Last year we celebrated Europe Day with the 70th anniversary of the Schuman Declaration; this time we are setting our sights resolutely on the future. On 9 May 2021, the EU will launch the Conference on the Future of Europe, a citizen-led series of debates and discussions that will be used to draw a roadmap for structural reforms.
Body

The Conference on the Future of Europe is led by the European Parliament, the Council of the European Union and the European Commission. Conclusions are expected to be reached on the further development of the EU, and guidance provided, by next spring.

European citizens, public stakeholders, civil society and organisations can all take part in the conference. At https://futureu.europa.eu, anyone can 1) share their thoughts on Europe and the changes which need to happen, 2) find related events to attend (digital, hybrid and physical), 3) create their own events to involve as many people as possible and 4) follow the progress and the outcome of the conference.

This platform is accessible in the 24 official EU languages and is organised around the following key topics: ‘climate change and the environment’, ‘health’, ‘a stronger economy, social justice and jobs’, ‘EU in the world’, ‘values and rights, rule of law, security’, ‘digital transformation’, ‘European democracy’, ‘migration’, ‘education, culture, youth and sport’ and ‘other ideas’.

The input provided on the platform will feed into the discussions held by the European citizens’ panels (with people who will be representative in terms of geographic origin, gender, age, socioeconomic background and/or level of education) and the conference plenaries (composed of representatives from the three institutions leading the conference).

The final outcomes will be presented next year in a report to the Presidents of the European Parliament, the Council and the Commission.

We are all part of the European endeavour. Let’s take the opportunity to shape the future of Europe together!