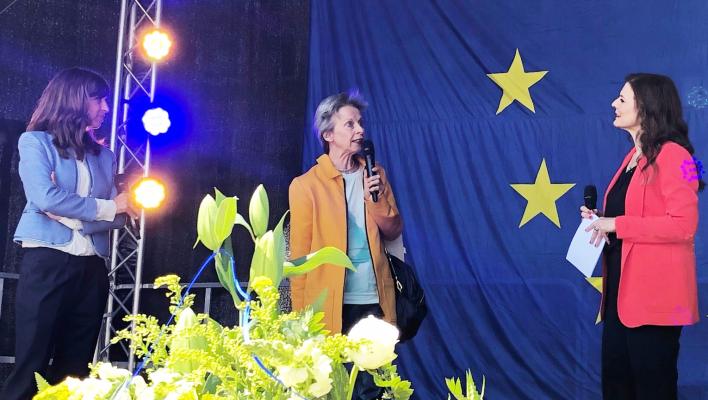 One of our former colleagues, Marion Van Alphen (Dutch translator) was on stage at the Europe Day celebrations in Esch on 9 May 2022. She talked about the Conference on the Future of Europe and her participation in its working groups. Retired from the Centre since the end of 2019, she kindly accepted to take part in an interview to share her unique experience with us.

The Conference on the Future of Europe, which concluded on 9 May 2022, offered citizens across Europe the opportunity to express their views during the year on what they wanted from the European Union. What prompted you to take part and what role did you play?

It all started with a phone call from an opinion research institute in Luxembourg. They asked me a few questions about Europe and, at the end of the survey, inquired if I would be interested in joining the European Citizens’ Panel of the Conference for the Future of Europe. I was not sure what it involved at that point but I happily accepted.

Since then, it has been a long and exciting journey!

I was invited to take part in one of four European Citizens’ Panels, discussed in the plenary panel sessions, and attended working groups for which I was spokesperson in Strasbourg in October, in the online session in November and in Warsaw in January. We made proposals for the report on the final outcome of the Conference, which was presented to the Presidents of the three organisers (the European Parliament, the Council of the European Union and the European Commission) on 9 May 2022. The Presidents will use it to draw up a roadmap for structural reforms of the European Union.

How many people such as yourself were actively involved in the European Citizens Panel?

In total, 800 citizens from all Member States took part in four different ‘European Citizens’ panels’ dedicated to 1) economy, 2) democracy/justice, 3) climate change, environment and health, and 4) EU in the world/migration. I was assigned to panel 3. There were 200 of us, plus moderators and experts to give us advice, interpreters and administration staff.

The organisers ensured participants were representative of the EU in terms of geographic origin, gender, age, socioeconomic background and level of education. One third were between 16 and 24 years old, which was great since we were talking about their future!

Each Member State had a certain number of participants depending on the size of the country. Luxembourg had eight representatives, two per panel.

Once selected, you did not represent an official Luxembourgish opinion nor act as a national group. You just gave your own opinion and thoughts.

How did the work with your working group go?

Well, it was slightly challenging at the beginning. To give you an idea, I talked to a retired German orthodontist, a Danish farmer, an Italian young designer, a French nurse, a German student, a Belgian hospital director, a Swedish waste collector, a Croatian schoolboy (17 years) and a Polish engineer. As a former political assistant to a member of the EU Parliament and then as an EU translator, I was able to raise people’s awareness of what Europe does for them – and that it does not decide everything in the EU.
What was great was the culture of debate that prevailed! We managed to understand each other’s positions and arrive at three joint recommendations.

What were these three recommendations?

Since our work focused on climate change, we discussed the Green Deal a lot. To ease the transition period to renewable energies, we suggested supporting the development of CO2 filters for industry. It’s not possible to shut down energy (from coal) production sites from one day to the next in countries that still depend heavily on coal. We need to find alternative solutions for the transition. This idea got 90% of the final votes in Panel 3 and received explicit support in the Plenary Session of the Conference on the Future of Europe.

Together with other working groups, we also made proposals to reduce intensive farming (emission of methane gas) asking for structural reform of the common agricultural policy towards sustainable production and quality instead of quantity, and to invest more in hydrogen research.

Thank you for sharing this valuable experience with us. I would like to ask you now a more personal question. Talking about the future, what advice would you give to the younger generation of people working for the Centre?

Keep informed, take part in cross-departmental/interinstitutional activities, invest in yourself (lifelong learning is key!), and don’t forget to develop hobbies alongside your work. Widen your view of the world. If you get a chance to participate in public debate like I have done, accept it immediately. It is very rewarding!